“I’m so excited that we’re back here in Dayton at Sinclair,” OMSDC Board Chair Abigail W. Kofete told the crowd. “The Annual Meeting provides an opportunity for everyone connected to OMSDC to gain a better understanding of the Council, learn about our strategic direction and what part they each play in it. I’ve been with this organization over 20 years and I’ve seen how effective we can be when we ALL do our part to accomplish our goals.” 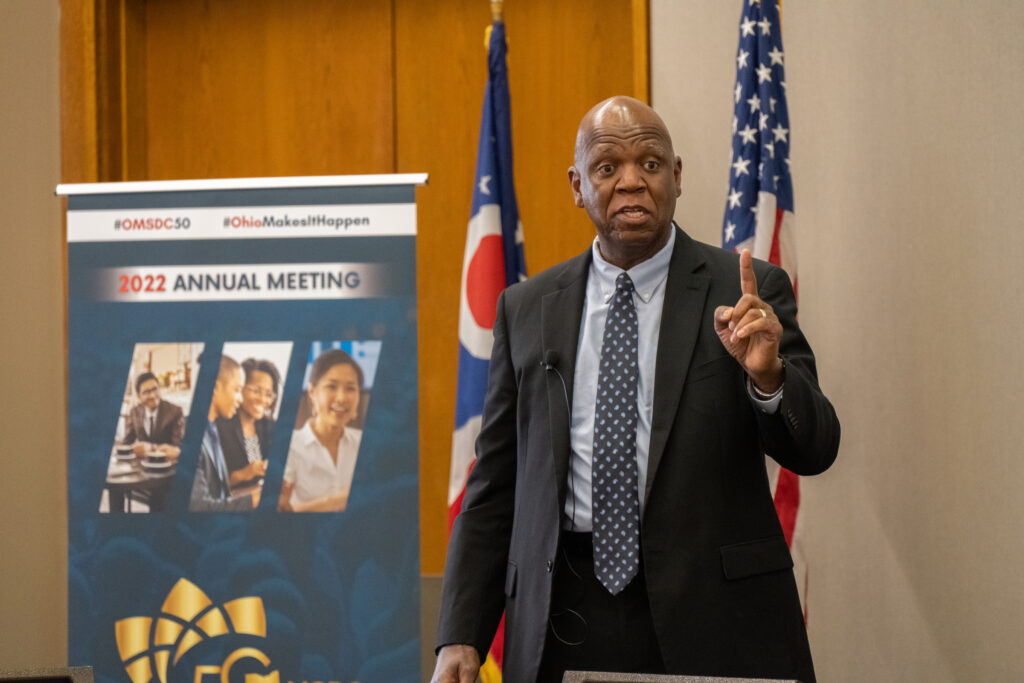 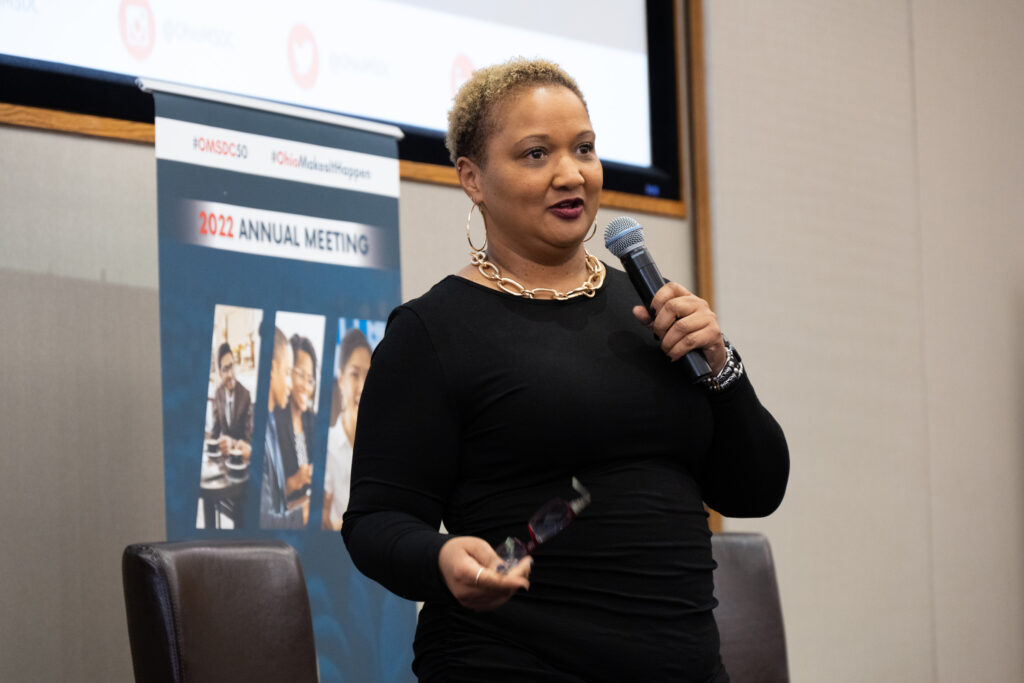 Kofete then shared that George Simms had been selected to be the new President & CEO of the OMSDC. Simms, formerly the Chief Operating Officer of the Council, had been serving as Interim President & CEO since late 2021.
“I am absolutely thrilled to share that (George) has become our new permanent President & CEO,” Kofete said. “George had been working with the OMSDC Board and Leadership Team as Chief Operations Officer to make improvements to Council operations and service levels. I’m confident he will continue the work he was doing in that capacity and will expand his efforts in this new role by building on that success and continuing to advance our mission.”

New Board Members Sworn In At Annual Meeting

Kofete then introduced the Board of Directors and conducted the swearing in of new Board Members.

Board Chair Abigail W. Kofete conducted the swearing in of new Board Members at Annual Meeting. Pictured below, from left to right are: 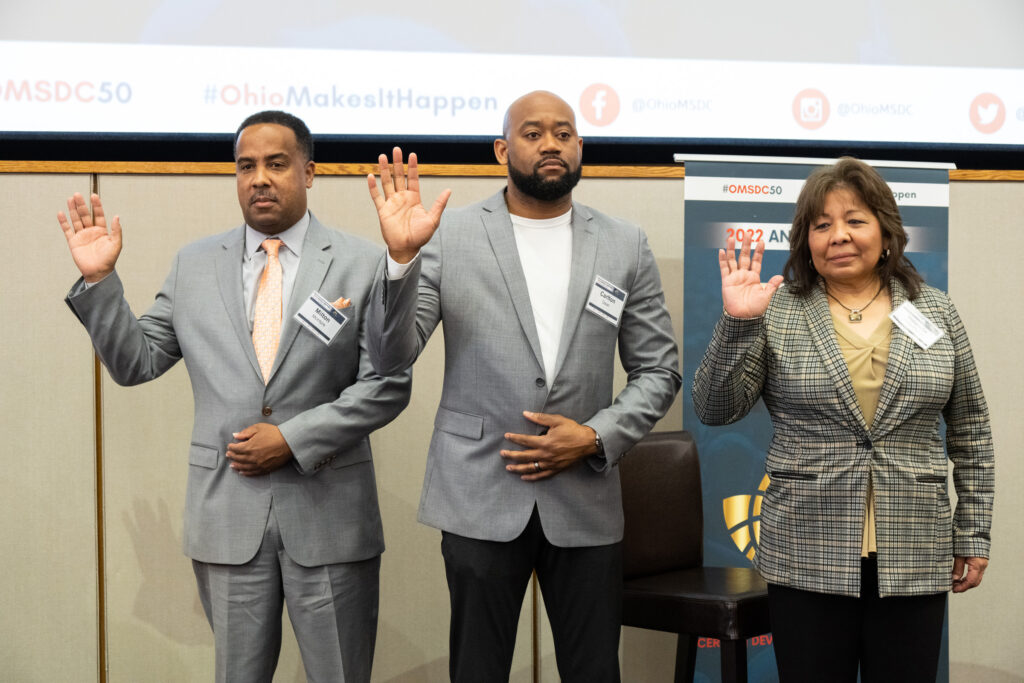 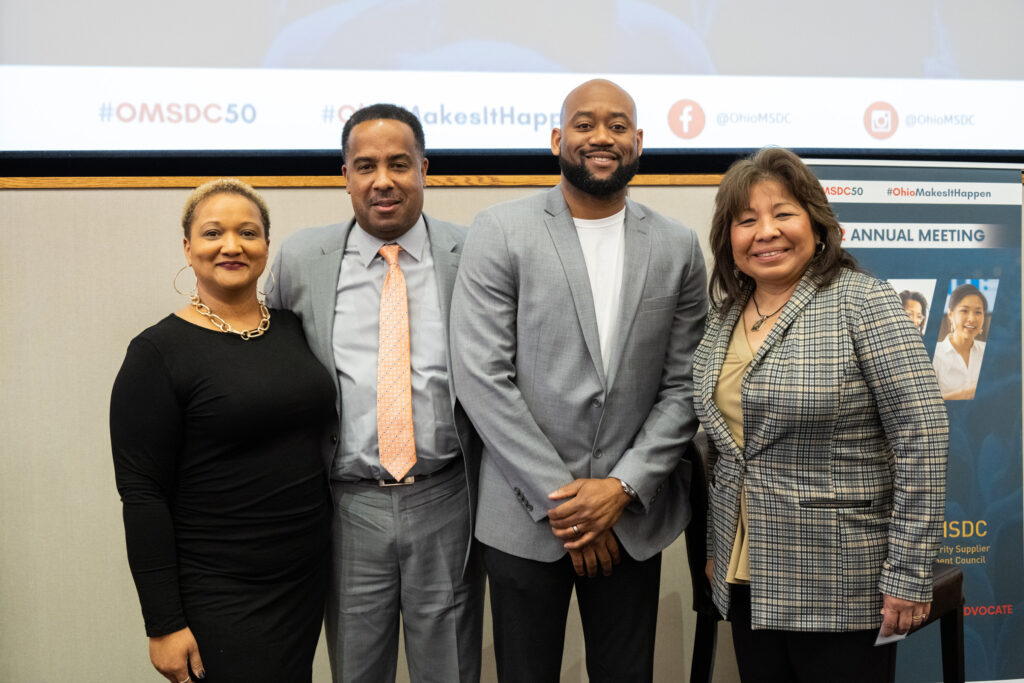 OMSDC leadership, including Board Treasurer Thomas Winston, Board Secretary Lynnise A. Smith, and MBE Input Committee Chair Christopher Che, delivered status reports on the state of the Council.

“As we look at 2021, we delivered, but we’ve got great opportunities ahead in 2022,” Simms said. “One of the key things for us will be MBE revenue growth, because we know that for every dollar that goes to MBEs, two dollars of economic output is generated for the community.”

“OMSDC’s goal is to achieve $30 Billion in MBE spend as a part of the NMSDC $1 Trillion Goal,” Simms shared. “This five-fold increase will yield $9 Billion in Corporate savings and will be 5% of Ohio’s GDP.”

As part of the $30 Billion Goal announcement, Simms shared a video from Intel, who created a special message to introduce themselves to Ohio’s minority business community. Intel recently announced that they would be building two new chip factories on nearly 1,000 acres in nearby Licking County.

“Intel’s Ohio factories, or Fabs, will be the company’s first brand new manufacturing site in more than 40 years,” Rob Kelton of Intel said “Intel’s two Ohio Fabs will create 3,000 high tech jobs, 7,000 construction jobs, and thousands more jobs in the supply chain and in local communities. We couldn’t be more excited to join you all in Ohio.”

“We’re extremely excited that Mayor Mims is going to be joining us here today during our lunch discussion to share the importance of supplier diversity and partnership with OMSDC,” Simms said.

Mims offered advice to MBEs on getting involved in community growth as well as how to work with local governments to expand business opportunities. 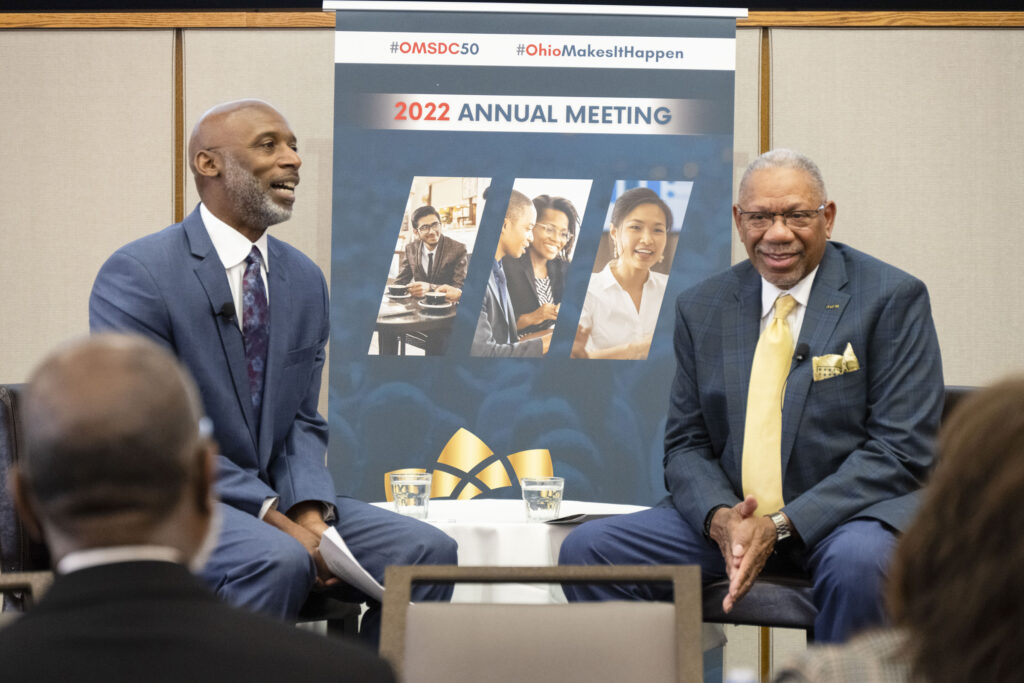 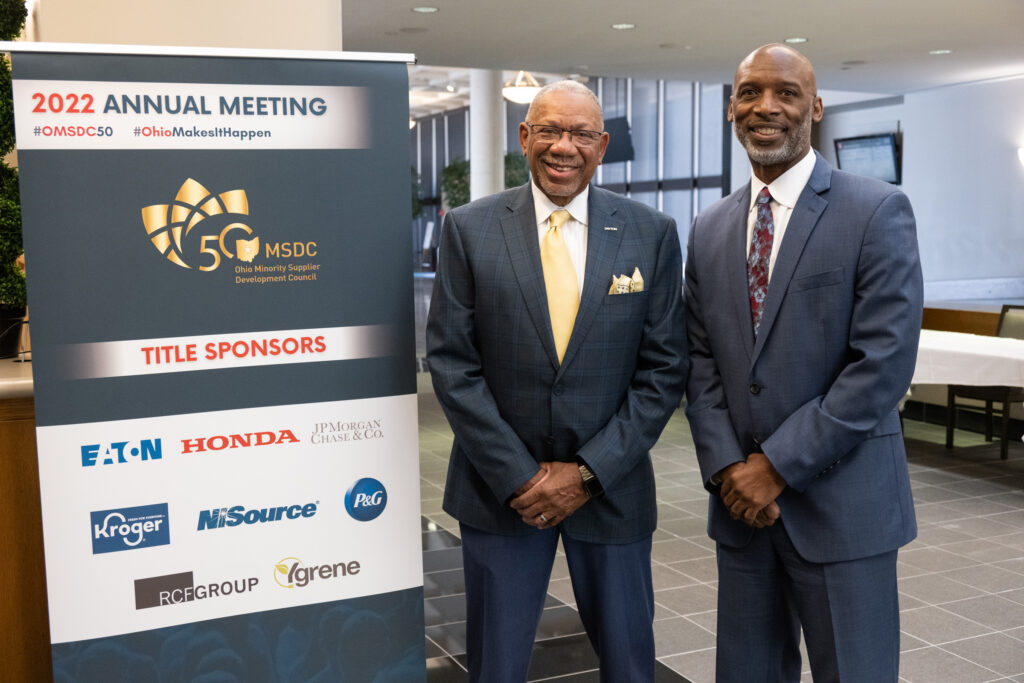 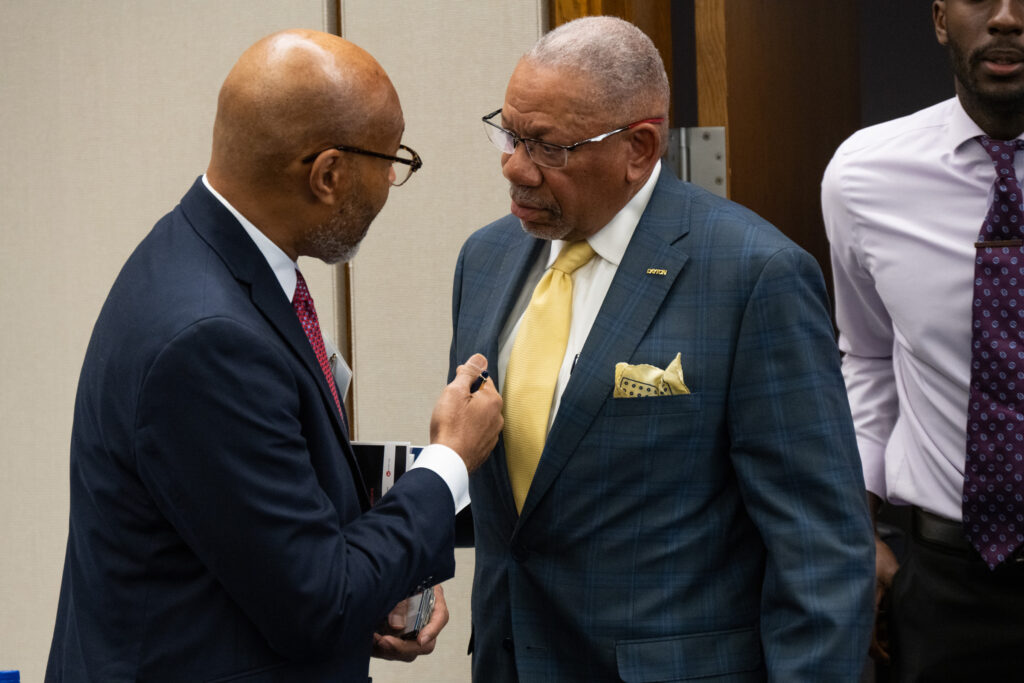 After the Leadership Luncheon, Jilson Daniels, Vice President, Economic Equity at the Cincinnati Port Authority (The Port), gave a presentation explaining the focus and benefits of the OMSDC’s Local Advisory Committees (LACs). Daniels, along with Jessica Shely of GPD Creative Agency and Ken Cartwright of Hightower EV, lead the Cincinnati region’s LAC.

Milton McIntyre, newly sworn in as an OMSDC Board Member and the Vice Chair of the MBEIC in the Toledo Region, introduced attendees to the goals the Toledo region has in business development. Calvin Brown, President & CEO of PNG Consulting, and Houston Young, Inclusion, Diversity & Community Outreach Leader at Owens Corning, joined McIntyre on the discussion.

Corporate Membership & MBEIC Breakout Sessions followed the LAC Focus & Benefits presentation, tasking the respective groups to expand and continue the conversation around involvement and participation, and determining next steps to growing influence and minority business development together in support of the newly-announced $30 Billion Goal. 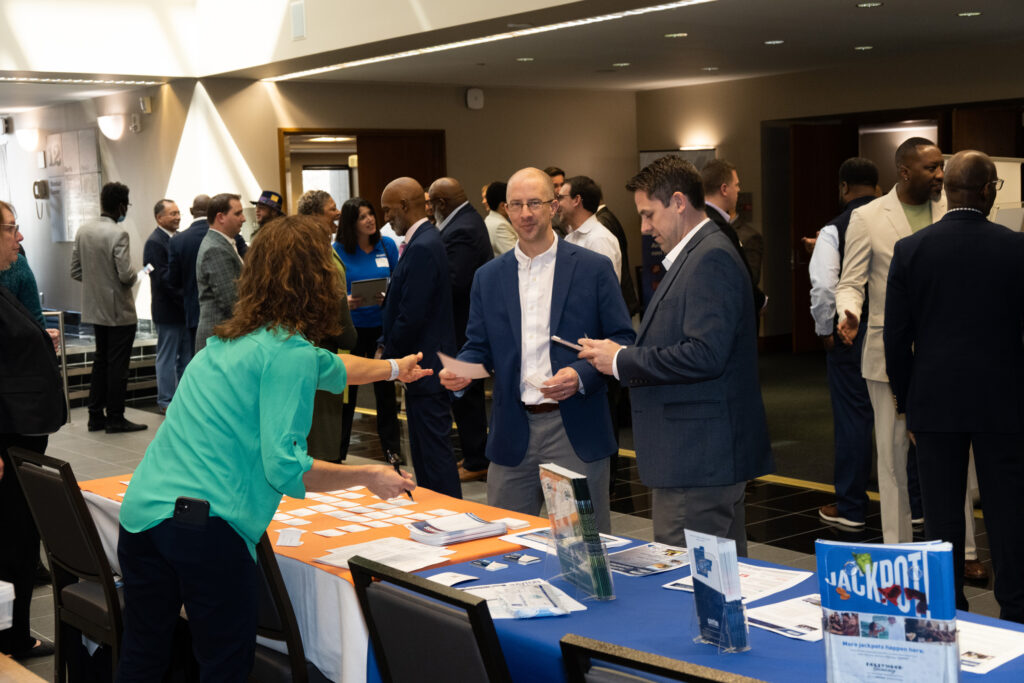 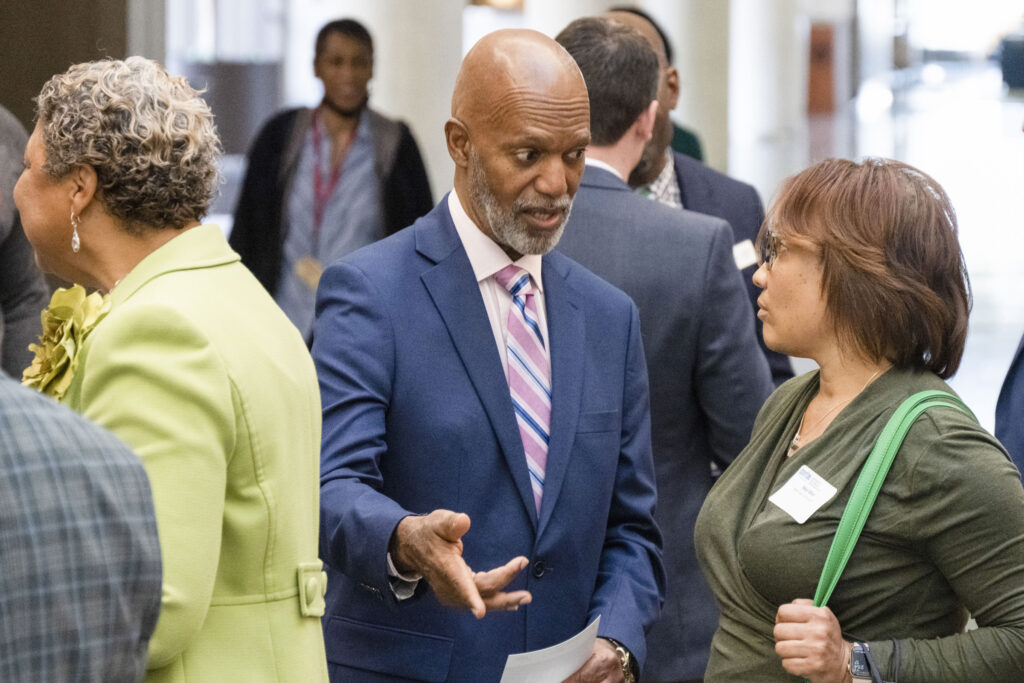 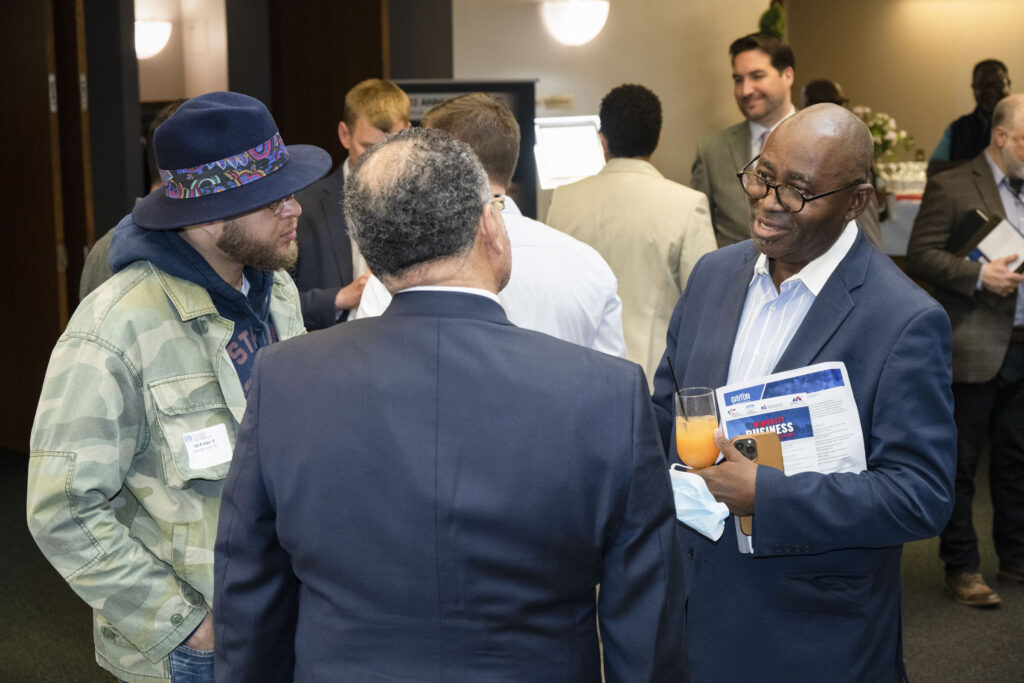 The Annual Meeting ended with a joint mixer co hosted by the Council, Dayton Area Chamber of Commerce and Minority Business Development Agency. Belinda Stenson, Vice President, Business Inclusion with the Dayton Area Chamber of Commerce, and Marco Grgurevic, State Director of the Ohio MBDA Business Center in Cleveland, joined together to invite local business leaders and minority owned businesses to network with the OMSDC network in attendance.

Response From The Community About Annual Meeting

The Council was pleased to hear that the Annual Meeting set Ohio’s minority business ecosystem up for a great 2022 and beyond. The $30 Billion Goal serves as a driving force that will lead the Council as it begins its journey for the next 50 years.

“Wonderful experience – and I had a chance to explore many expansive business opportunities to advance equity in Ohio. As a first-time attendee and new corporate member, I felt very welcome.”

“This was a great “coming out of the pandemic” event for OMSDC. The energy in the room was inspiring and gives me so much excitement for the future of OMSDC.“

“The mixer was a great way to end the day. often we go our ways after an annual meeting but the mixer brought everyone together in a festive atmosphere. Thank you!”

A SPECIAL THANK YOU TO OUR SPONSORS

The Ohio Minority Supplier Development Council offers special appreciation and acknowledgement to each of the sponsors and supporters who made our return to in-person events a success.